The Emperor Has no Clothes was centered around a series of psychological experiments on concepts of obedience and authority by psychologist Stanley Milgram. Milgram was interested in the psychology of the atrocities committed by German soldiers during WW2, particularly the soldiers that cited that they were only following orders to justify murdering human beings. One of Milgram's experiments involved an actor wearing a white doctors coat instructing study participants to deliver increasingly high-voltage shocks to a second actor in another room who would scream and eventually go silent as the shocks became stronger. The shocks weren't real, but the participants were made to believe that they were. The majority of participants obeyed even when the individual being shocked screamed in pain. Milgram’s interpretation of his research was that everyday people are capable of carrying out unthinkable actions in certain circumstance, particularly when a superior ordered the actions. His research has been used to explain atrocities and genocide. Importantly, not all participants obeyed the experimenter's demands, and Milgram’s studies shed light on the factors that enable people to stand up to authority.
The stop motion film questions why individuals within political, medical, and pharmaceutical establishments willfully obey unethical and immoral situations.
INTUITION TESTED AND APPLIED
​CONSCIOUS - Vintage Grandfather clock casing, 22inch television and moving image.
SUBCONSCIOUS - Vintage filing cabinet, vintage garden riddle, plants, compost, glass watering globes, card and poetry.
UNCONSCIOUS - Vintage brass door handle and engaged lock.
Intuition Tested and Applied was an installation of objects centered around the three levels of human consciousness. We can view consciousness as three distinct levels ( or can we ??) : conscious, the subconscious and the unconscious. The first level of consciousness is known as the conscious state, and this refers to our immediate awareness that we are experiencing and recording through complex bundles of synchronized signals perpetually collected from all human senses. And so, it could be that time signals are neatly packaged within those bundles of life experiences. The second level is known as the subconscious and is like a huge filing cabinet where all your memories, beliefs, and internalized emotions are stored. Everything that has ever happened to you is there, deep inside your mind. Your subconscious is designed to store, filter and retrieve data. Your conscious mind can be thought of as the gardener, planting seeds. Your subconscious mind can be thought of as the garden, or fertile soil, in which the seeds germinate and grow. The third level is known as the unconscious and this is made up of thoughts, memories, and primitive/instinctual desires that are buried deep within ourselves, far below our conscious awareness. Even though we’re not aware of their existence, they have a significant influence on our behaviour, beliefs, fears and insecurities and we can’t readily access the information which is stored in the unconscious mind. Much like a door we know is there but can not be opened.​
PSYCHOSIS
Vintage mirror, video camera lens, card, Rorschach inkblot, led lights, vintage welders mask, IPad and moving image.
Psychosis was an installation centred around delusionary and hallucinatory symptoms of different mental illnesses and medical conditions. The symptoms creating false beliefs or impressions that are firmly held, even though its contradicted by reality and what is commonly considered true. Many of the delusions result in the fear that external forces use surveillance technologies and control one's general thoughts. Hallucinations can occur in any sensory modality : visual, auditory, olfactory, tactile and gustatory. The scientific community are studying these symptoms within virtual reality environments as withdrawal and avoidance of other people is frequent in schizophrenia, that leads to isolation and rumination.  Using this form of brain stimulation may enhance social cognitive therapy by immersing individuals in virtual worlds without the need to engage in stressful situations.
SECURING IDENTITY
Steel profile gauges, magnets, brass cogs, door peephole lenses, steel hook lock, steel chain lock, steel bolt lock.
Securing Identity was focused on the growth and capabilities of mass state surveillance and our ever dwindling personal freedoms. State run personal profiling agendas use draconian policies that result in electronic technologies recording, collecting, storing, organizing, analysing, searching, and distributing information about citizens culminating in the infringement on privacy, and anonymity within society and we are told is necessary for our own safety and protection, whether we voted for these civil liberty abuses or not. 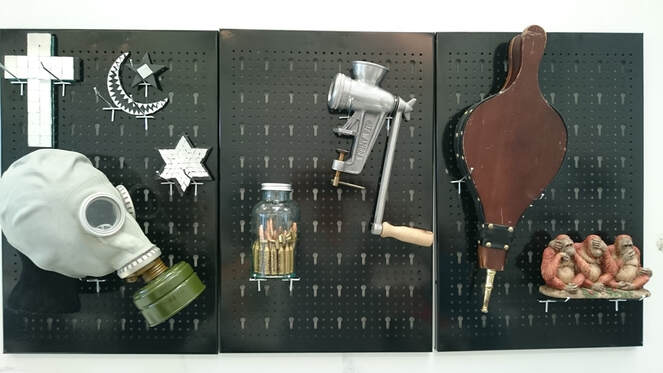 D​ECEPTION TOOLS
Wall tool rack, gas mask, bullets in a glass jar, vintage meat grinder, wood and mirrored religious symbols, pottery ornament and vintage bellows.
Deception Tools was an installation concerned with systems used by government to manipulate and control citizens. Disinformation and misinformation through mainstream media are the favoured techniques of politicians, they reach citizens on mass. Most people are influenced by their moral and ethical compass and governments use these virtues as vulnerabilities when engaging in propaganda, whether using religious belief, fear of harm by an enemy seen or unseen and utilising the media to fan the flames of that fear. Another favourite deception technique of politicians is the demonising of foreign states that do not comply with a foreign policy agenda, engaging the media to report stories of atrocities that need to be rectified by an intervention of 'humanitarian aid' in the shape of military bullets and force rather than food and dialogue.  Additionally, the deception of plausible denial when senior officials within government deny knowledge of or responsibility for any damnable actions committed by personnel in an organisational hierarchy because of lack of evidence that confirm their participation.
SHARING SECRETS
Ceramic figurine, brass door peepholes, acrylic paint.
Sharing Secrets is concerned with the UK governments relationship with Saudi Arabia, a country with a historic pattern of breaches of international humanitarian law. The British governments justification for turning a blind eye is that the Saudis offer invaluable intelligence in the fight against Islamist groups such as Islamic State and al-Qaida. A diabolical case of if you scratch my back and I  will scratch yours. However, fail to mention the billions of revenue acquired due to UK arms sales that are being used during the Saudi led genocide in Yemen.